The Northwest Territory Métis Nation (NWTMN), the Federal Government of

Canada (Canada), and the Government of the Northwest Territories (GNWT)

have been negotiating a land and resources agreement for the Northwest

In early 2012, the Akaitcho Dene commenced litigation against Federal Canada

regarding Federal Canada’s duty to consult owed to the Akaitcho Dene, with

motion. Canada and the NWTMN argued that “the NSMA is essentially seeking

to expand the action beyond what is really in issue, and broaden the inquiry into

proceeding” (from the Federal Court Docket).

On March 16, 2016, the Federal Court of Canada dismissed the application from

the North Slave Métis Alliance to intervene in the Akaitcho Territorial

“The Northwest Territory Métis Nation rightfully has the support of the

membership and community councils in representation of its indigenous Métis

members. The Federal Court of Canada recognizes this.

“This reinforces the legitimacy of the Northwest Territory Métis Nation, as the

representative body for indigenous Métis, to pursue a contemporary land and 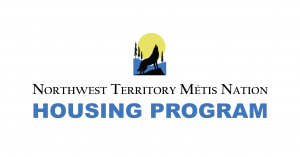 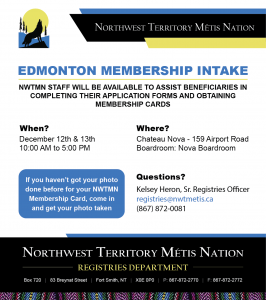 NWT Métis Nation staff will be available to assist beneficiaries in completing their application forms and obtaining membership cards in Edmonton, Alberta. If you have not yet had your photo 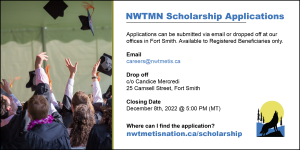 Applications can be submitted via Email or dropped off at our offices in Fort Smith. Available to Registered Beneficiaries only. EmailCareers@nwtmetis.ca Drop offc/o Candice Mercredi25 Camsell Street, Fort Smith Closing 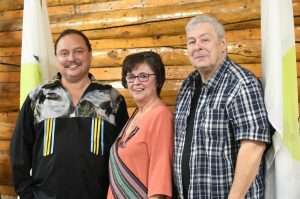 As selected at the Northwest Territory Métis Nation 2022 Annual General Assembly; we are pleased to announce that the following individuals have been selected to serve the 2022-2026 term as