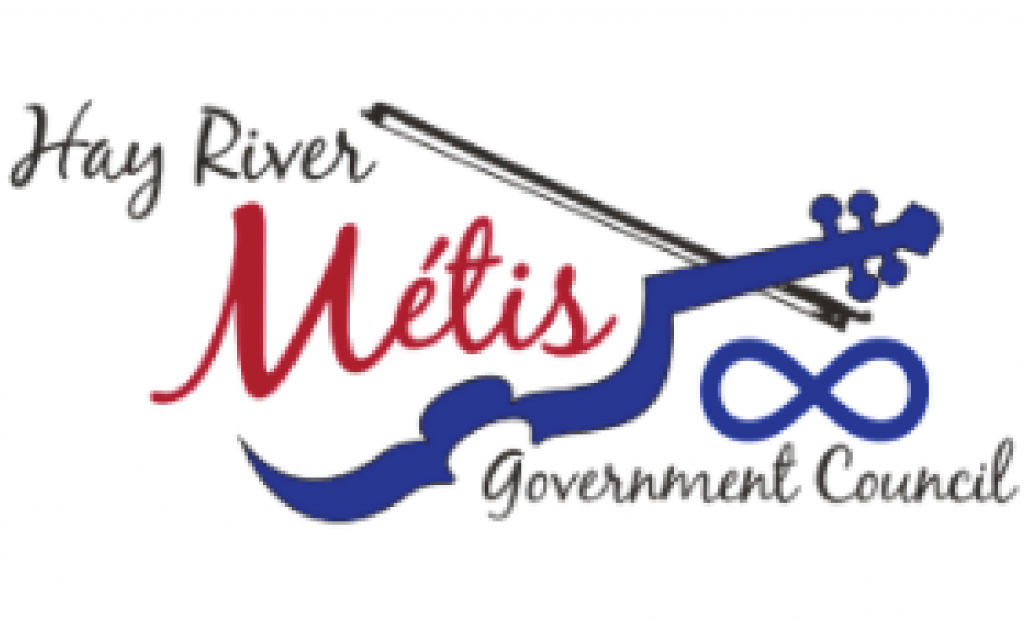 About the Hay River Métis

In 1788, North West Company (NWC) trader Charles Boyer chopped down some trees to build a fur post on the north side of the Peace River not far from the present town of Fort Vermillion, (near the mouth of, what else, the Boyer River). Fort Vermillion played a key role in the settlement of the Hay River area because of its location on the Peace River which linked it to the southern water routes. The only other way into the area was down the Peace River, on down the Slave River and along the south shore of Great Slave Lake to the mouth of the Hay River.

Then the NWC built another post in 1806 on the west bank of the Hay River near where it met the Alexander River, calling the “Upper Hay River Post”, the first building near the present settlement of Meander River. It operated until 1818 when a wee mishap with an open keg of black powder leveled the joint. It never was completely rebuilt and closed in 1820.

Although the site of “Hay River” was recorded on maps as early as 1854, it was not until 1868 that HBC sent John Hope to build a post at the mouth of the Hay River. The fur returns were never good at the post so it was only open for ten years, closing in 1878.

Meanwhile, back at the mouth of the Hay River, the Roman Catholic Church, under father Fascon, opened the “Sainte-Anne” Mission. It existed until the HBC post closed in 1878.

“St. Peter’s” Anglican Mission and Residential School opened in 1893. In 1899, Margaret Tims became the first full time teacher on salary from the Federal Department of the Interior. In return for two years service, the government rewarded her with $550.00. She had thirty-six students in 1900, only six from Hay River.

A new three-storey residence and isolation hospital was added to the Anglican establishment in 1917. The RCMP built a detachment in 1925. The Roman Catholic Church started building a school and hospital in 1929.

On September 1, 1937, the Anglican Residential School closed but a day school continued to operate until the opening of the Federal Day School in 1949.

Up until 1939, all development at Hay River had been on the east side of the river, but lower water on the Athabasca River changed that in 1939. The Yellowknife gold fields couldn’t be re-supplied because of low water. The feds stood to lose gold mine revenue. Not good. A winter road was quickly slashed through from Grimshaw to Hay River to Yellowknife the winter of 1938-39. The following winter, three companies were running tractor trains on the road and buying property on Vale Island, the west side of the river.

In 1939, fifty-two lots were surveyed on the northeast side of Vale Island.

The U.S. Army improved the road from Peace River to Hay River; they built roads from Hay River to Fort Smith and Hay River to Mills Lake and Fort Simpson. The U.S. Corps of Engineers built an airstrip on Vale Island in 1942.

The D. O. Transport and Royal Canadian Corps of Signals took over the air radio and airstrip in 1944. In 1945, Canadian Pacific Airways had an office in Hay River and supplied a weekly service between Peace River, Hay River, and Yellowknife. Imperial Oil set up its tank farm on Vale Island in 1945 and the RCMP opened a detachment on the west side of the river.

Great Slave Lake was opened to commercial fishing in 1945. In the winter of 1948-49, there were four companies fishing and 113 fishermen working out of Hay River. By 1949-50, there were ten companies and 611 fishermen licensed. Fresh fish was being trucked on ice to New York City in six days.

The all weather Mackenzie Highway connected Hay River to the south in 1948. By that time the RCMP, RC of Signals, DOT, Federal school and Teacherage, two restaurants, two boarding houses, the fuel depot, general store and a pool hall had all located on Vale Island.

The Bond Construction Company built a road to the West Channel in 1948 where five companies built fish plants (two other companies, Menzie and McInnes, built on previously purchased lots).

So, by 1950, there were basically three settlements around the mouth of the Hay River, the original settlement (now the Hay River Reserve) on the east side, the fishing community out on the west channel, and the service and transportation community on the north east of Vale Island.

By 1959, Northern Transportation Company Limited (NTCL) had moved its main operations from Bell Rock at Fort Smith to Hay River. With the completion of its synchrolift and maintenance facilities by 1973, as well as the establishment of local bases for major trucking companies, Hay River had become the transportation “Hub of the North’.

Canada Coast Guard selected Hay River as its main base for their operations in 1962, an operation stretching from Saskatchewan and Lake Athabasca to the Arctic coast.

Vale Island was inundated with heavy floods in 1963 (as it had been in 1951) that required the evacuation of the town. Since then (1963) a new town has been built on the mainland south of Vale Island.

In the early 1960s, Cominco took up its option for development of the lead-zinc deposits at the site of the former Pine Point Mines, 60 miles east of Hay River. The mine development was contingent upon a rail line being built; which was done, finishing with a branch line to Hay River in 1964.

There are some 400 Hay River Dene Band members and of these, just over 260 live on the Reserve, part of a modern community that combines business ventures with traditional and culturally-based living.

The present municipal boundaries of Hay River extend to just south of Paradise Valley, about 28 kilometers south on Highway 2; these boundaries abut those of the settlement of Enterprise. The west and north boundaries are formed by the south shore of Great Slave Lake to the west side of the mouth of the Hay River.

From its beginnings as a Dene and mission settlement of about 60 residents in 1892, the town has grown in just over 100 years to a population of over 3600. 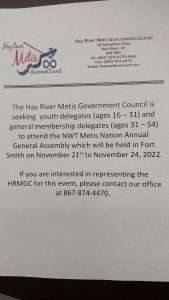 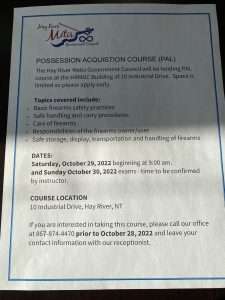 The Hay River Métis Government Council will be holding a PAL course at the HRMGC Building at 10 Industrial Drive. Space is limited so please apply early. Topics Covered Include:– 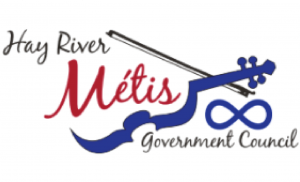